Welcome back to another Art Lab post! Today I’m going to be showing you my drawings for Inktober 2018. Inktober is a challenge to draw one pen or ink drawing each day for the month of October. You’re supposed to follow the “official prompts” which I’ll show you in a bit, and then share your art with others.

I’ve never done this challenge before, although I’d heard of it, but one of my lovely readers asked if I was doing it, so I decided to try it! I’m glad I did. 😀 Even though I didn’t strictly follow the rules (it was close to the middle of October before I had time to start), I did use all the prompts and drew something every day when possible. 🙂 Here’s the prompt list:

{via}
I usually tried to do something somewhat creative with the prompts and not use the first idea that came to my head. Some of my art turned out splendid, while other pieces I wish I could tear out of my sketchbook. XD Buuuut I suppose I’ll show you all of them anyway, as a reminder that to make good art, you have to make some bad art too. 😉
Alright, Day #1! I couldn’t decide whether to draw a poisonous mushroom or a black widow spider, so I drew both. 😉 I didn’t realize I had any colored inks other than gold ink until after I had “finished” the drawing, so I just added some random purple afterward. 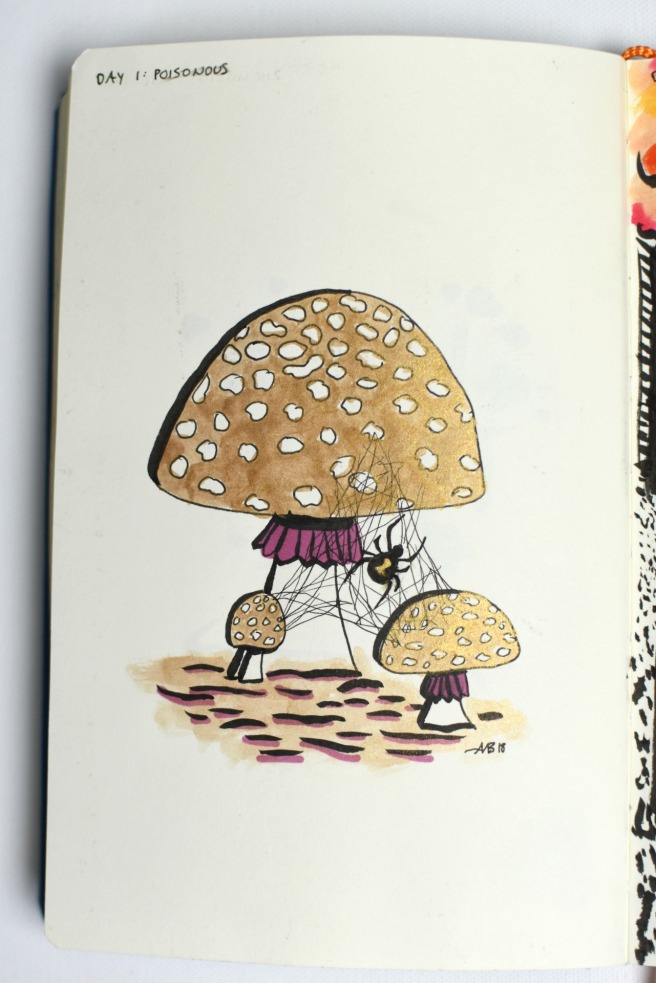 For Day #2, I discovered I DID have colored inks! Do brush pens count? Because that’s what I used. If they don’t count… well, I didn’t use color for most of the pieces after this. Anyway, I drew a lake with trees around it/in it for the prompt “tranquil.” It was a nice idea, but with the bright colors and different sizes and directions of lines, it didn’t turn out very peaceful after all. XD

I like this one! Since it’s fall, I decided to draw roasted pumpkin seeds with a cut pumpkin in the background.

Ooh, this is one of my favorites – maybe even my favorite! The prompt was “spell,” so I took that two ways – one as in “magic spell” and the other as in “spell a word.” I wrote sentences from the chapter in The Lion, the Witch, and the Wardrobe called “The Spell Begins to Break,” forming them into the outline of snow melting from a flower as winter is defeated. It took rather a while to write so many tiny letters, but it was worth it. 🙂

I figured since I’ve already drawn a detailed chicken (here’s a print of it), I’d go for more of a cartoon style this time. That hen is one skilled balancer, eh? 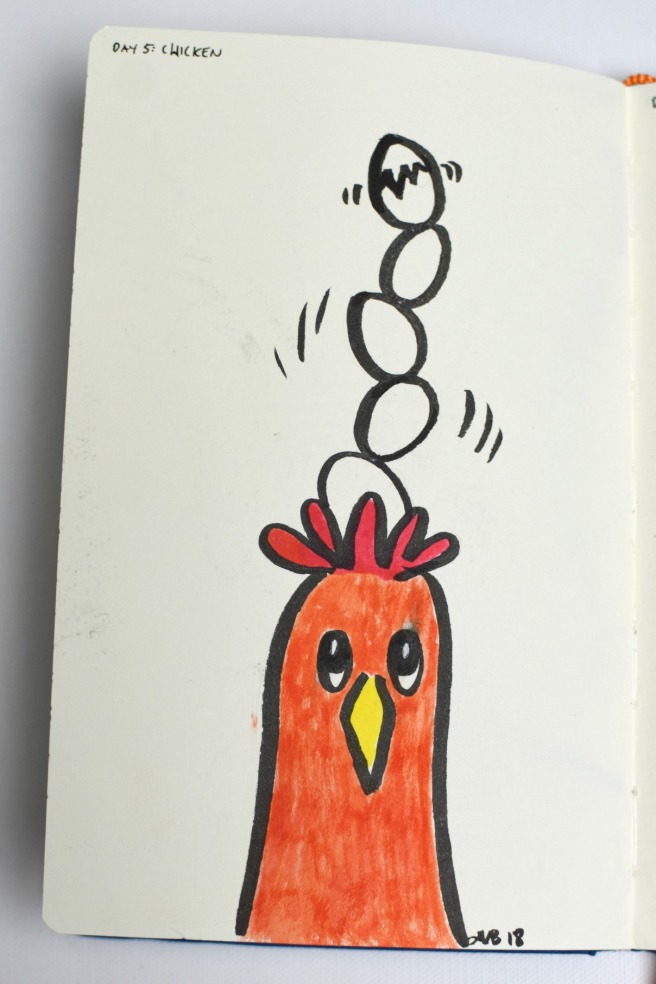 For the prompt “drooling,” I thought about Anna from Frozen – remember that scene before the coronation? But I didn’t have internet access for days 2-12 (I drew them in one day to catch up) and I didn’t trust myself to draw it without a reference. XD So I used a picture from a dog breeds book to draw a St. Bernard.

How could I go through Inktober without drawing an eye, right? XD I attempted to draw an exhausted eye, and it sort of worked. It also kind of looks unimpressed, heh heh. 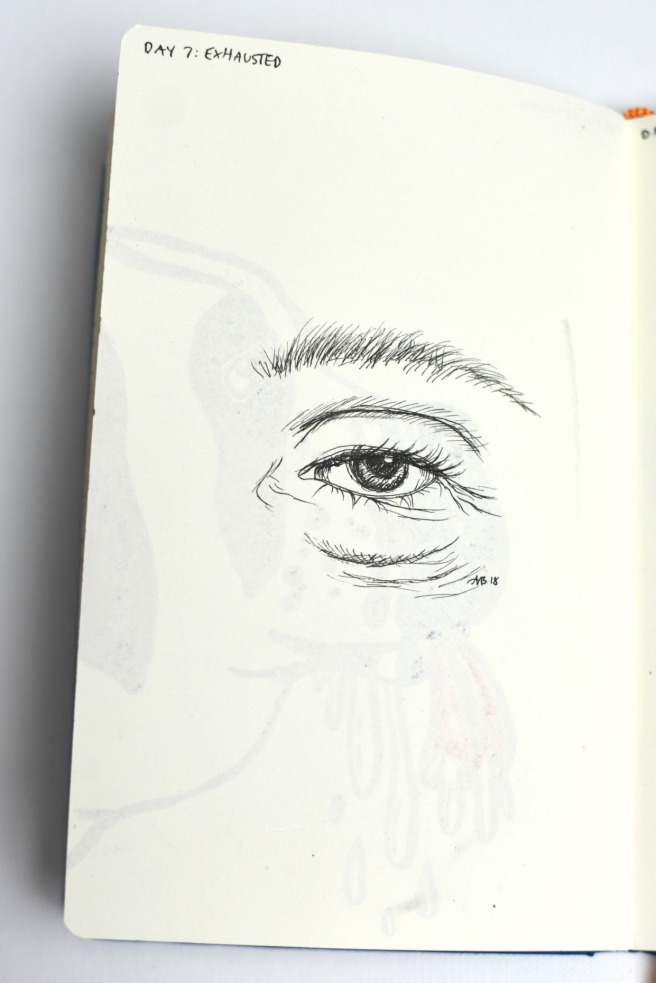 It was hard to pick an idea for the prompt “star” since there are so many beautiful things to draw with stars! I could have done a watercolor night sky illustration… but watercolors aren’t ink. Instead, I drew the Milky Way pouring into the Big Dipper. 🙂 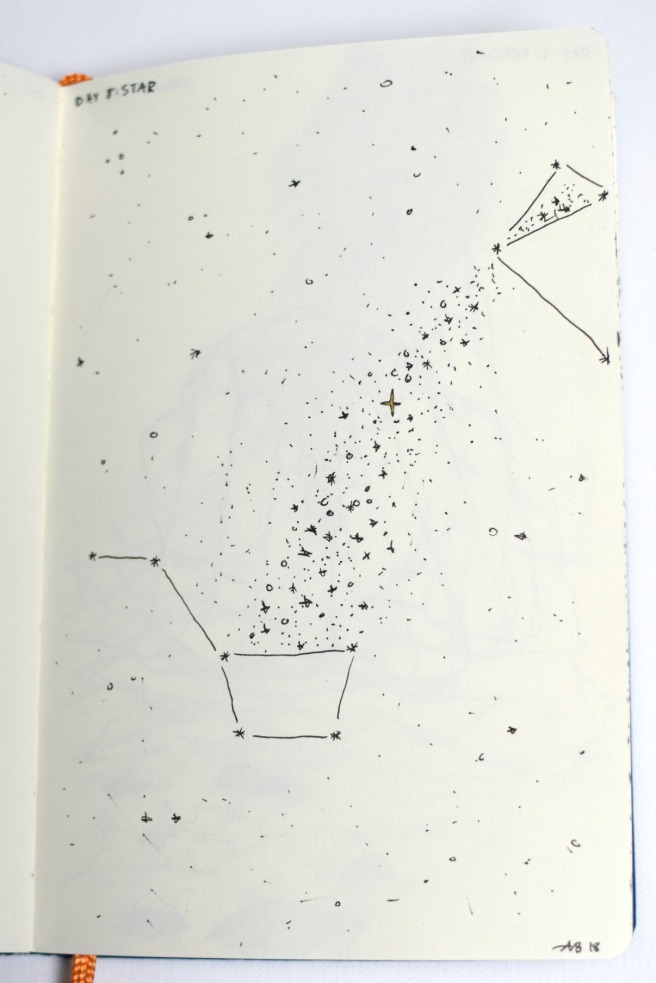 This one was HARD! I drew a baby for the prompt “precious” – referring to both the baby and human life in general, born and unborn. Since I didn’t have internet, I took a picture of myself holding a lens bag so I could get the hands right. XD I didn’t exactly get the hands right, but it DID help. WHY ARE HANDS SO HARD??

Ooh, I really like this one! For the prompt, “flowing,” I drew a girl with flowing hair and a flowing dress standing in a flowing stream. 🙂

“Cruel” is a hard prompt, isn’t it? My cousin likes to doodle faces like the one on the left, so I took inspiration from her and made a Hitler-like face glaring cruelly at a little boy. O.o To accentuate the difference, I drew Hitler Guy with sharp, angular lines, and the boy with soft, curvy lines. 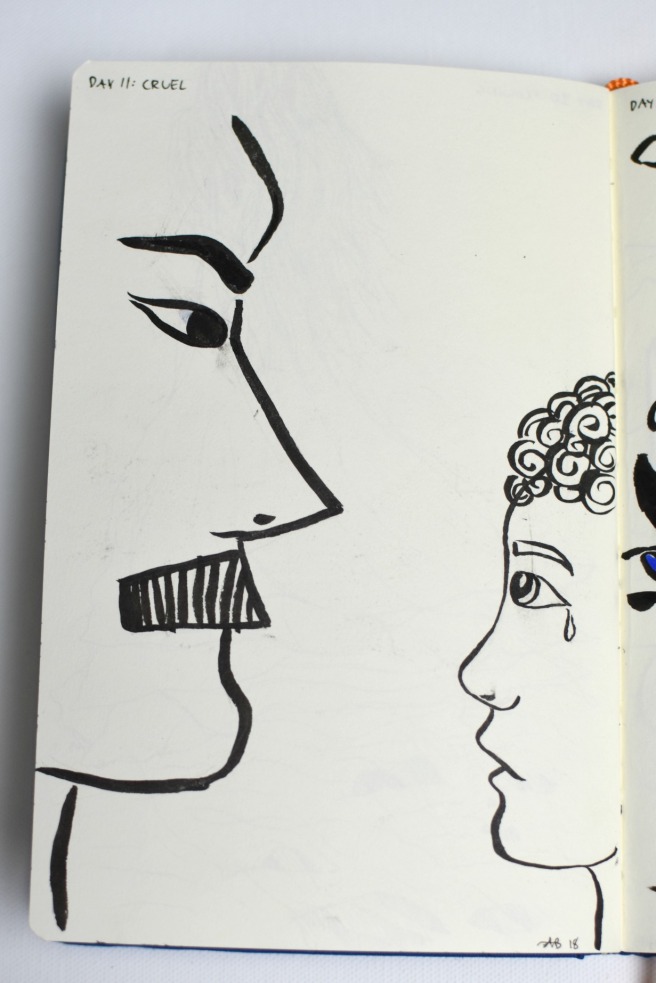 Ugh, this is one of my least favorites. It’s so scribbly and poorly drawn, but ANYWAY. 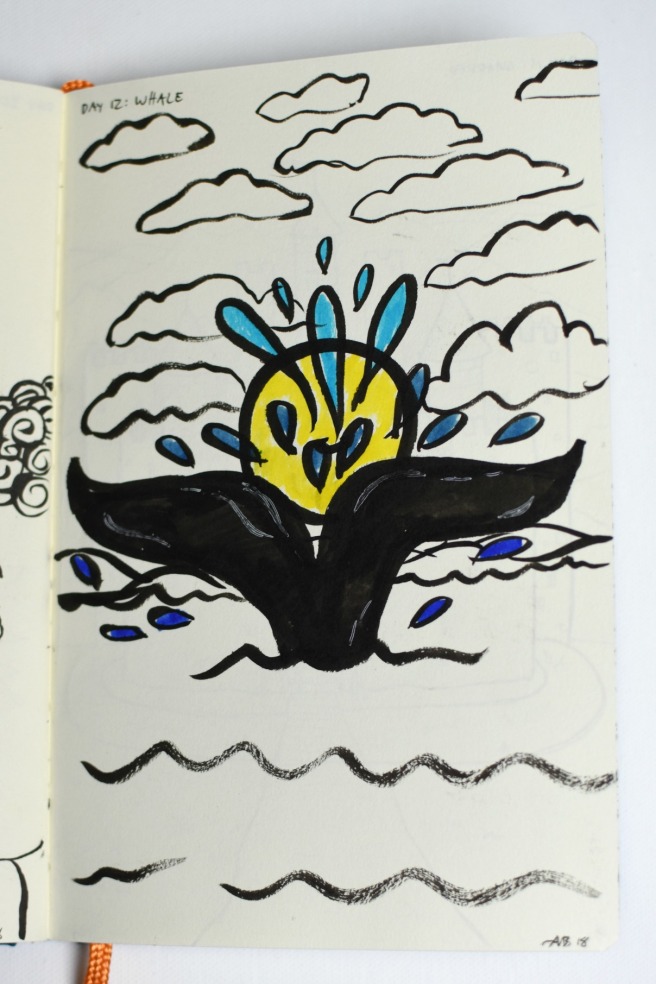 I quite like this one, though! It took a while. This castle is very well-guarded with I believe five knights in shining armor and many crocodiles swimming around the moat. Also a sturdy stone wall, a drawbridge, and iron bars across windows and doors. The kingdom should stay safe for years! XD I’m not the great at coming up with buildings, so I’m happy with how this one turned out! 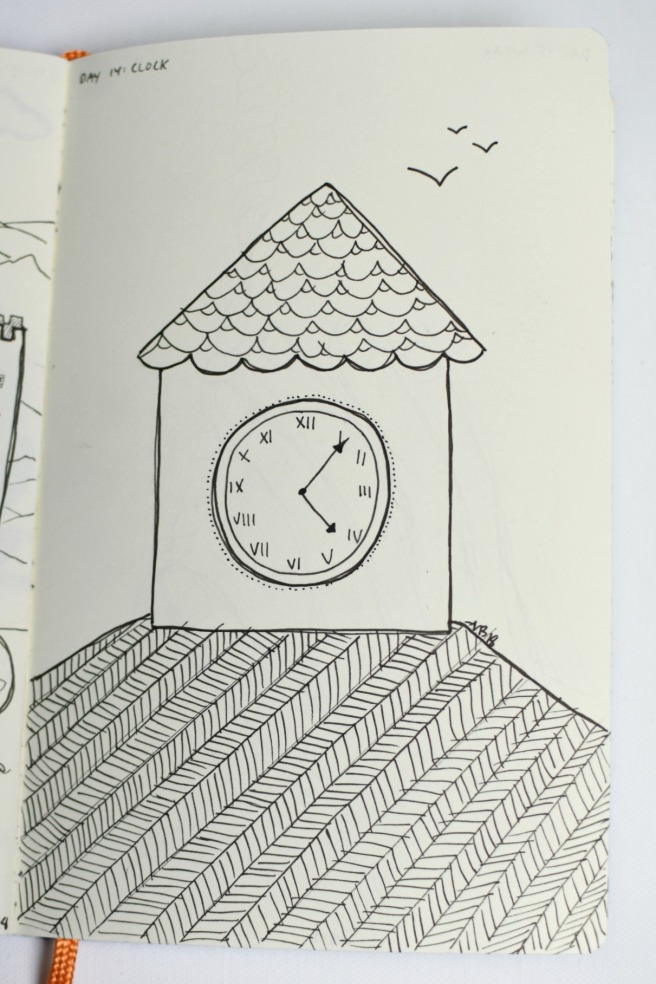 UGH I DO NOT LIKE THIS ONE. It’s hard when you don’t have a reference other than your own fingers! (After the internet came back on, I decided to try and draw without it for the rest of Inktober, to make it more of a challenge.) I drew a weak, falling-apart rope, and a hand not strong enough to hold on any longer. I guess the hand isn’t terrible, but I had to add extra lines to make the shape right since I couldn’t erase, and then add more lines to make those stand out less, and it just got really muddled.

This was inspired by some envelope art I did, which I’m sure will come up in a later post. I love mountains! ❤ These are more like lumps of rock, but oh well. They’re angular. 😉 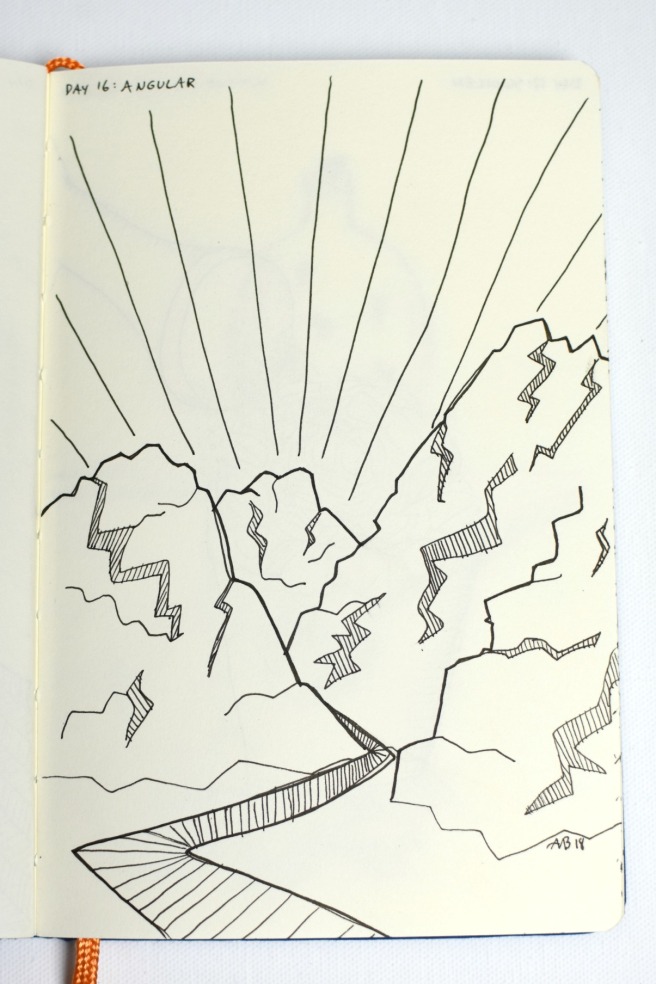 I didn’t want to draw any gross swollen eyes or fingers or toes or something, so I drew the swollen-looking leaves of a succulent being watered by a rather swollen end of a watering can. XD

I forgot a prompt here, so I had to divide this page in half to add it in, since I had already written out the rest of the prompts in the sketchbook. I thought about doing a ship in a bottle or a world in a bottle, but decided that was kind of unoriginal, so I went with fireflies. 🙂 I used my gold ink to make them “shine.”

How do you like your marshmallows? Straight out of the bag? Lightly browned? Perfectly toasted? BURNT TO A CRISP? Apparently this person prefers the last option… 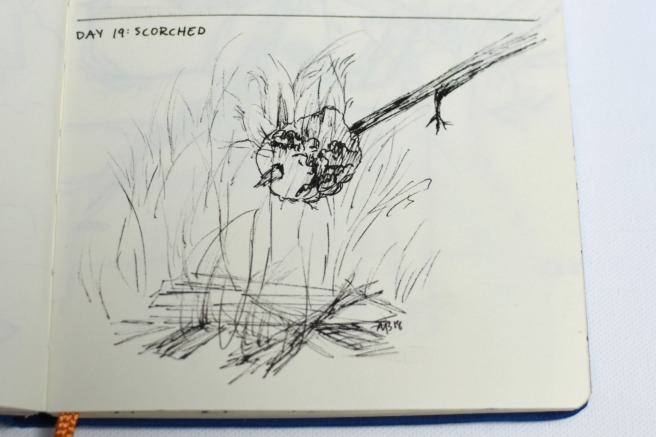 Something with glass is the obvious choice for “breakable.” So I didn’t draw glass. 😉 I drew someone breaking a Hershey bar (maybe to go with the scorched marshmallow). The hands are improved, I think, although they’re rather out of proportion, with short, stubby fingers. All the same, I think this turned out alright. 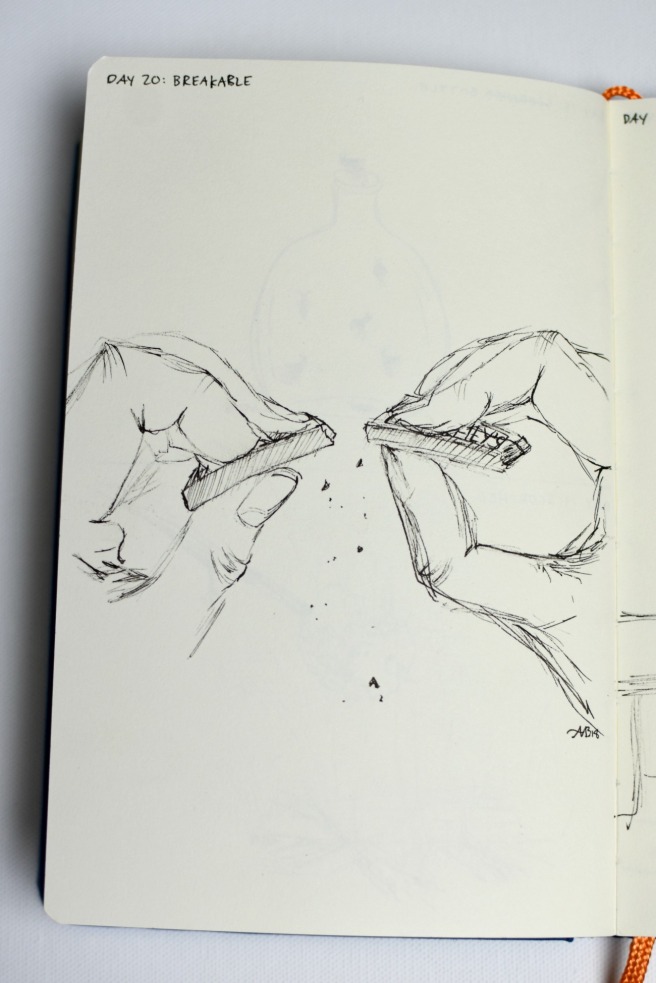 This one is confusing, I know. I got confused myself many times while trying to draw it. The girl is drawing her arm which is drawing a card from the pile, and the person drawing the girl is erasing some errant lines. And then, of course, I drew all of it. PHEW. 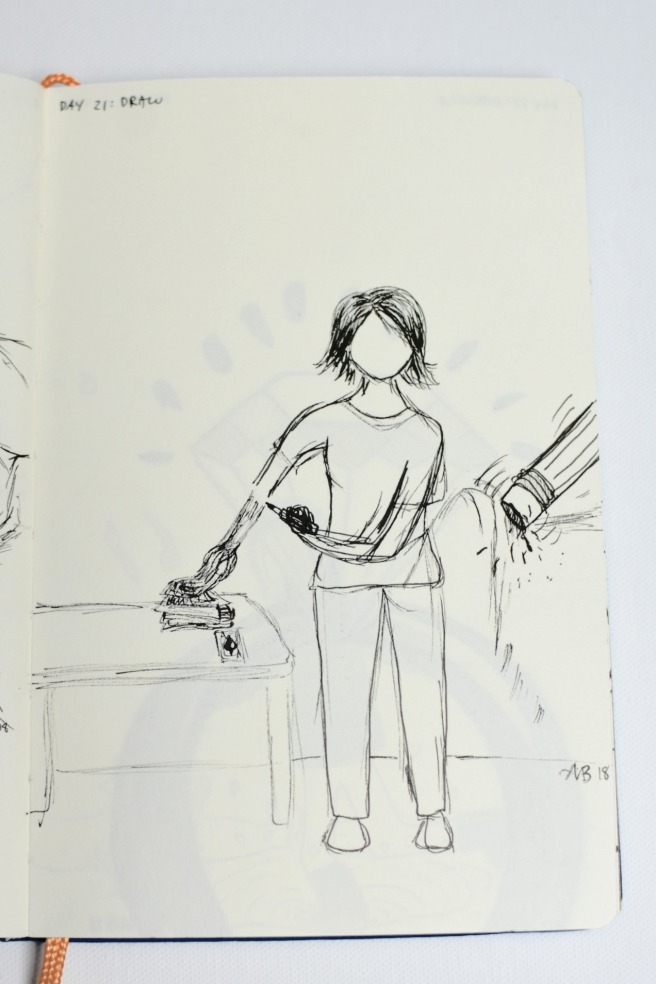 I really wanted to draw a diamond for “precious,” but decided to save it for this prompt. Diamonds are so fun to draw! The ring is just a scribble, but ah well.

I first thought about a pig in the mud for this prompt; therefore I discarded that idea and drew a girl jumping in a mud puddle. Isn’t she cute? I’d like to draw more people in this style eventually. 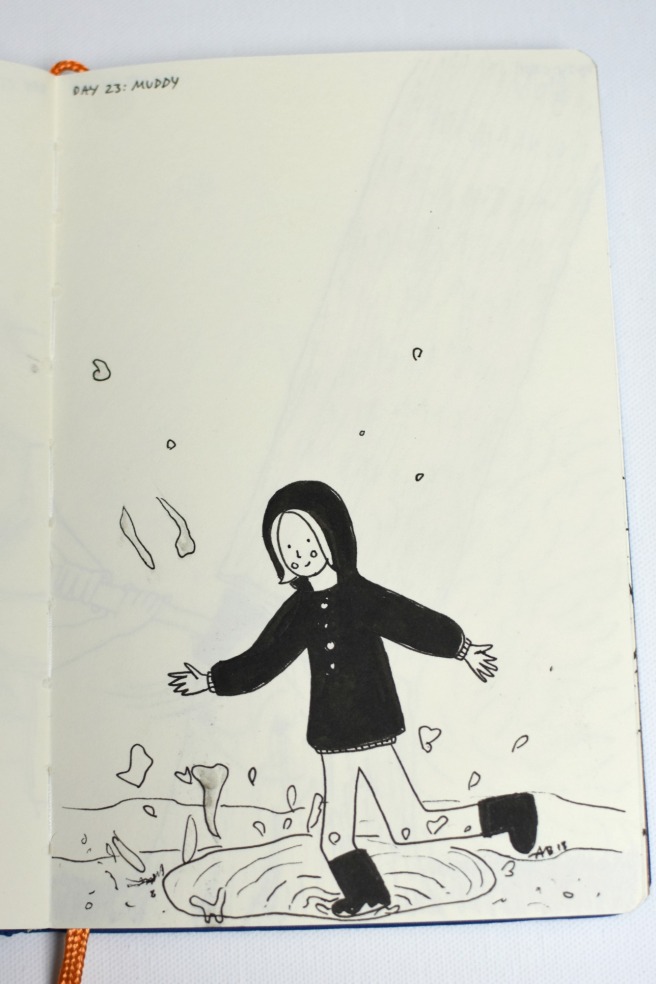 I first thought about a knife chopping vegetables, and I kind of wish I drew that. But nope, I drew a guy (or girl) chopping down a tree. THE HANDS. WHY CAN’T I DRAW HANDS? *facepalm* This is where I really needed a reference picture because I could NOT, for the life of me, imagine how people hold axe handles! -_- 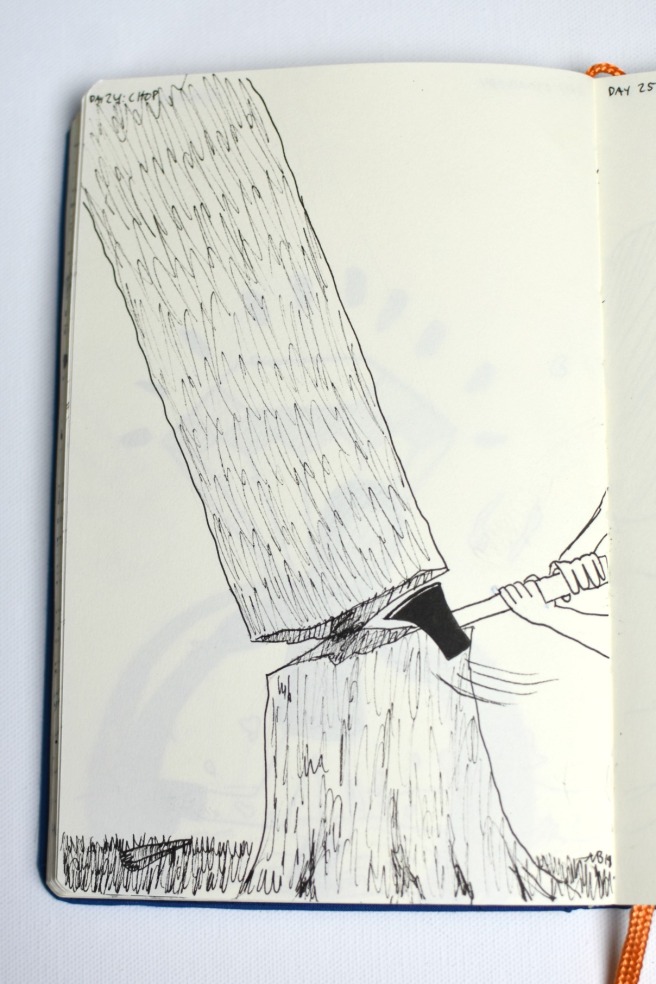 For “prickly,” I knew right away I wanted to draw a hedgehog, and this time I went with it. Hedgehogs are just too cute to pass up. 😉 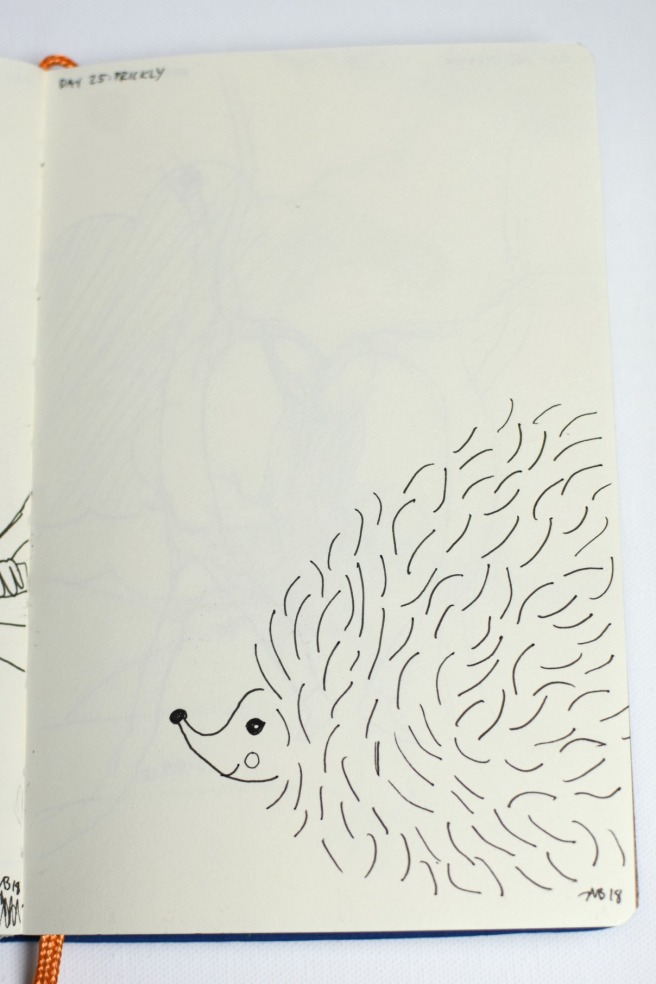 OKAY I APOLOGIZE – THIS IS UTTERLY TERRIBLE. This is by far my least favorite. *hides* It would have helped so much to simply make a pencil sketch first, but I didn’t do that for a bunch of these drawings (again, more of a challenge!) and decided not to here either. THAT WAS A MISTAKE. I was going to draw two people stretching/bending to make a heart, but when that didn’t work, I kind of just drew random lines and eventually just gave up. *shudders*

This one is a tiny bit more acceptable. A bit. I puzzled over how to draw thunder without lightning accompanying it (because then the lightning would be the focus, not the thunder), and ended up shading some of the clouds and attempting to make the tree blowing in the winds of the storm. Eh.

Ooh, I do really like this one, though! I like this style of drawing. (That’s my problem – I like so many different styles of drawing that I haven’t really found MY style, since I draw in, like, 234875 different ways! XD) I am aware that this is pretty unoriginal, but I couldn’t think of many other options…

This one is simple, but I like it. For the prompt, “double,” I drew a double-yolk egg cracked into a bowl. And… yep. That’s that. XD

Jolt was a hard prompt too. (I think verbs are just hard in general.) I decided to draw a cow shocked by a jolt of electricity from an electric fence. 😛 The cow is, heh, cute… but not very cow-like. You’d think I could do better than that having lived on a dairy farm for most of my life, but as we already established, I HAVE TROUBLE DRAWING WITHOUT A REFERENCE SOMETIMES. :’D Ohhhh dear. 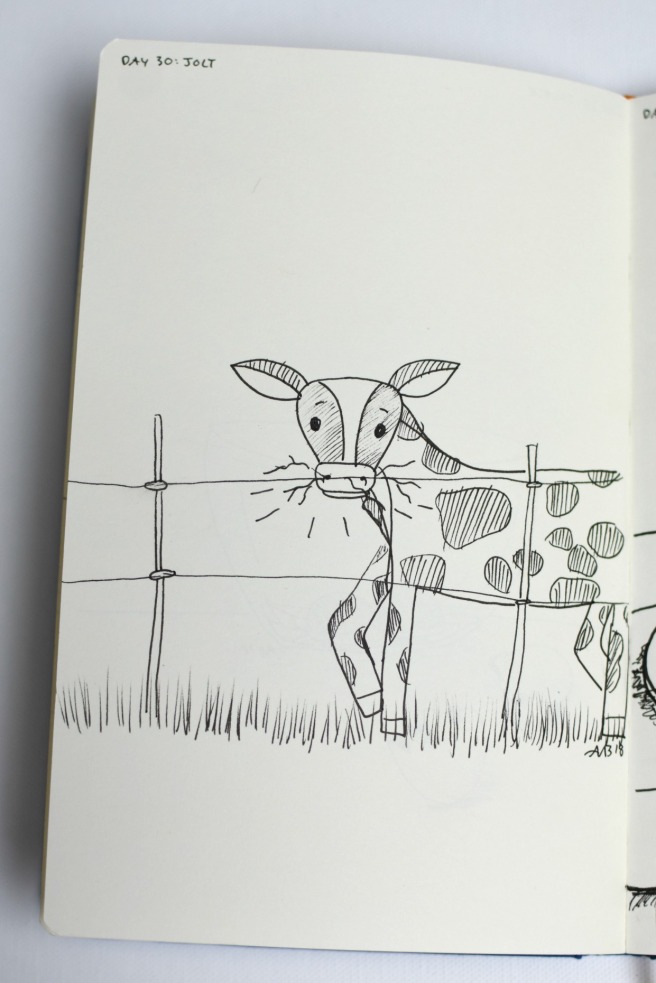 I was going to say, “and ending on a pie note,” as in “high note,” but this is more like a mediocre note, so… You are (sort of) spared a terrible pun. AHEM. For the final prompt, “slice,” I gave in and did what came to mind – a piece of pumpkin pie. The dots on the side of the pie took forever. *wipes brow*

And that’s all, folks! I hope you enjoyed seeing my interpretations of the 2018 Inktober prompts and listening to my mainly disparaging comments. XD Please don’t take them too seriously, though. I know sometimes it’s discouraging (“well if THAT’S bad, what about MY art?”). That’s happened to me as well. But don’t worry! #1, most of the time we’re our own worst critic (cliche, I know), and you’re not as bad off as you think. #2, I was annoyed at some drawings simply because I know I could have done better. However, it was still a fun challenge and it showed me that I REALLY NEED TO WORK ON HANDS, and also that a reference picture is often invaluable. 🙂
Before you go, I’d love to hear – have you ever done Inktober? Which of my drawings were your favorite? And what would you have drawn for one of the prompts?
Thanks so much for reading, dears, and please have a lovely day!
***Allison***
Advertisement

This site uses Akismet to reduce spam. Learn how your comment data is processed.